AN EVENING-TRIBUTE TO CAROLINE AIGLE

AN EVENING-TRIBUTE TO CAROLINE AIGLE

On the eve of the International day for the right of women, the city of Paris in France, organized an evening in honor of Caroline Aigle, who became in 1999, when she was 24 years old, the first ever woman fighter pilot in the French Air Force.

Caroline joined Polytechnique School in 1994. She then integrated the Air School in 1997.
With all her intellectual and physical qualities, she chooses the "Chasse" (hunting), which just opened this year to women...
She would became the first woman "macaronee" (qualified to be a fighter pilot...).
She was assigned to the Mirage 2000-5 in the Dijon Squadron 2/2 Cote d'or in 2000 where she was patrol leader.
In 2005, she became flight Commander.
Caroline married a Breitling Patrol pilot and was the mother of 2 boys.
In 2006, she was promoted Commnder and her next step was to be Astronaut...
She spent  an astrohpysical degree and learned Russian in order to conquer the Stars..
She died on the 21, of August, 2007 at the tender age of 32 from a cancer.

"Becoming a fighter pilot was my dream. I just think about all these people who have dreamed of it as well before me and could not make it...". Caroline Aigle 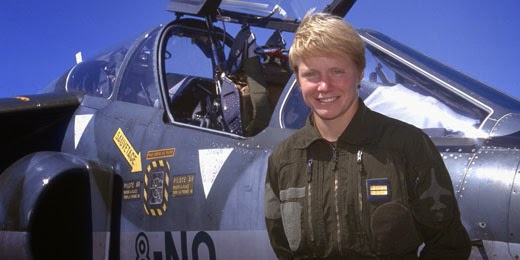